So if Denzel and Moses are no longer Number One on my list, I need to start looking for a replacement.  I try Googling ‘Native American Male Models’ again, and also ‘Long Haired Men’ and a few other variations.  There are a whole bunch of new guys pictured there.  Are the elves at the North Pole custom making these guys one at a time, and Santa is distributing them around the world a few here and there?  Can I order one?

Clicking on a picture takes me to all kinds of new web sites.  At least, new to me.  Tumblr. Pinterest.  (I now have accounts on both those sites, but damned if I know what to do with them.)  And I find this guy.  OK.  Excuse me a minute while my ovaries explode.  There. Breathing again.

But I can’t find out who he is.  So every day while I’m on the computer, I spend some time looking for this guy.  I’m now looking for a model for the cover of my romance novel and this guy looks like he might possibly be Native American.  I tell myself I am doing research.  I spend hours on the Internet.  I think about him constantly.  I dream about him.  It took me a week to find out his first name is Tanji.  Love it.  Now I’m getting somewhere.  Another few days and I discover his full name is Tanji Islam.

Tanji is of East Indian descent, lives in NYC, is a model and actor, and has probably the most spectacular male hair I’ve ever seen.  Google ‘Tanji Male Model’ and the first two web sites are his profile on Model Mayhem and his Facebook page.  Look at his pictures.  He has a variety of looks and his recent pictures don’t look a lot like his earlier pictures.  Nose straightened. Cheekbones more prominent.  Skin darker.  Hair – still incredible.  Think he’s had work done?  Drool over his pics, don’t forget to breath, and let me know what you think. 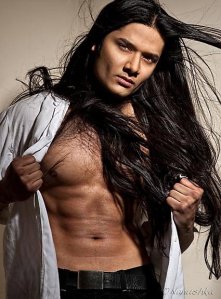 And Tanji…get on your Facebook page once in a while.  You haven’t posted anything since Mother’s Day.  You have fans.

Yes, Tanji is definitely in the running for Number One Most Beautiful Man.  But then  there is this guy.

Don’t you just want to put your mouth on that tattoo and then see where it’s pointing?  This guy showed up about 2008.  There are maybe a couple of dozen pictures of him, most from the same photo shoot…and then he disappears.

He shows up under two very different and unique names:  St. Umid and Humpemsquaw.  Now I can get behind St. Umid, sort of exotic, and memorable.  But Humpemsquaw – get real.  What I find even harder to believe is that some people, OK mostly women, out there in the cyber universe really believe that is his name.  There is some lively discussion about him on a couple of sites, the main one being www.vishstudio.deviantart.com   Most of the photos of him out there in the cyber universe were taken by Andrei Vishnyakov of said deviantart web site.  There are also a few pictures by Russian photographer Alex Krivtsov.

Then on Sept. 28, 2010, someone set up a profile for him under the name Humpemsquaw on Model Mayhem.  They were on the site until Nov. 1, 2010 – 35 days.  No one has been back to update the site since.  On this site, it claims that he is Native American.  His profile on Model Mayhem says he doesn’t do nude shoots.  Buuuuutttt…Google St. Umid and the first web site that comes up has a picture of him, up front, up close, and personal holding onto his rather ginormous erection.  Umm, maybe it’s the camera angle.  No really.  Google St. Umid and see for yourself. ( www.stumid.tumblr.com/ ) 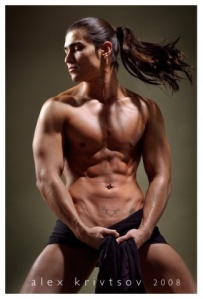 And now here comes the lively discussion part about him on various sites.  Is he Russian, is he Native American, is he for real, is that tattoo for real, can I lick it…?  And then he disappears.  No more pics, no info, no nothing.  He has no Facebook page, no Twitter, no Web site, no Instagram, no nothing.   Did the spaceship just land, beam him up, and the gods took him back to the planet where they custom make beautiful men with glorious hair?  But the discussions continue.

If you know who this guy is, or what has happened to him, let me know, I’ll post it.