A permanent mark or design made on the skin by a process of pricking and ingraining an indelible pigment.  Pretty simple definition.  Tattoos, however, are anything but simple.  First a little history.

The practice of tattooing is at least several thousand years old, but the English word tattoo is relatively recent. The explorer Captain James Cook introduced the word to the English language.  The earliest reference to the verb tattoo is found in his 1769 diary.  The word tattoo originates from the Tahitian word “tatu” meaning to mark something.  The Polynesian word “tatao” meaning to tap may also have influenced the word tattoo.

Otzi the Iceman, found frozen in the Otzal Alps in 1991, is one of the oldest examples of tattooing.  He has 57 carbon tattoos; a line of dots down his spine, behind his left knee, and on his right ankle.  Otzi lived 5,500 years ago.

Wall paintings from ancient Egypt show they were tattooing at least 4,000 years ago.  From there the practice spread to Persia, Arabia, Crete, Greece, and China.  During the Roman Empire criminals and slaves were marked for identification. In Asia tattoos were used to show social status or in religious ceremonies.  The Norse, Danes, and Saxons tattooed their family crests on themselves.  In 787 AD Pope Hadrian banned tattooing, however, it remained popular until the Normans invaded in 1066. The Normans did not like the practice of tattooing and tattoos disappeared in Europe from the 12th to the 16th centuries.

In 1691, the sailor William Dampier brought a heavily tattooed Polynesian named Prince Giolo to London.  However, tattooing in Europe did not become popular until the late 1700s when Captain James Cook brought another tattooed Polynesian named Omai back to London.  Soon many of the upper class were getting small tattoos in places that couldn’t be seen. But the process of tattooing was painstakingly slow, each puncture of the skin having to be done by hand and then the ink applied.

So, tattooing didn’t really catch on until 1891 when Samuel O’Reilly invented that first electronic tattoo machine, with its basic design of moving coils, a tube and a needle.  These days anybody can get a reasonably priced and quick tattoo.

This is Olive Oatman, reported to be the first tattooed woman in the US.  Make that white woman, since many Native American groups tattooed women.  She was kidnapped by the Yavapai in 1851 and a year later traded to the Mojave who adopted her.  Chin tattooing by the Mojave was thought to be a means of identification in the afterlife.  She was traded by the Mojave to Cavalry soldiers at age 19.

Really ladies?  A couple cute little butterflies or flowers here and there – OK – but this? What’s the point?

Hunkalicious Pics of the day 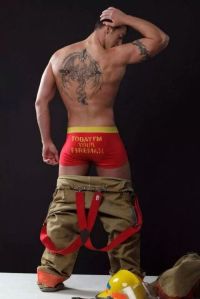 Uh. Guys.  Over here.  My house is on fire.  I know because I just started it.