So…a couple of weeks ago I promised you more on this hunkalicious guy.

I first saw a few photos of him on Pinterest.  When I was able to get up off the floor and back into my chair, I started looking for him in the cyber universe.  Most of the pictures gave his name as Kellen Jamison and a couple identified him as Angelo Cruz.  I couldn’t find anything else on him under Angelo Cruz, so don’t know where that even came from.

However, under Kellen Jamison he is all over Olivia Cunning’s Blog (www.oliviacunning.wordpress.com).  In her book Touch Me, Kellen Jamison is the best friend of the main character Owen.  She apparently found these pictures while writing her book and just knew that this guy was Kellen.  So now if you Google Kellen Jamison, you get are pictures of this guy and links to Olivia’s blog.

It took a while…though I’m getting better at this cyber stalking stuff all the time…but I finally found out who he really is. 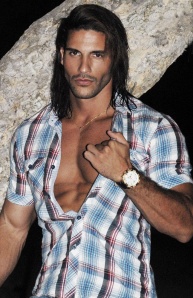 He is an Israeli/Spanish software engineer.  He speaks English, French, Spanish, Hebrew, and German.  No, really…that’s what his Facebook pages say.  He has a Band Page   (www.angelmacho2.bandpage.com/ ) whatever that is.  There is one song and a few pictures on it.  He is on Instagram (www.instagram.com/only_angelito), and has a couple of Youtube videos.